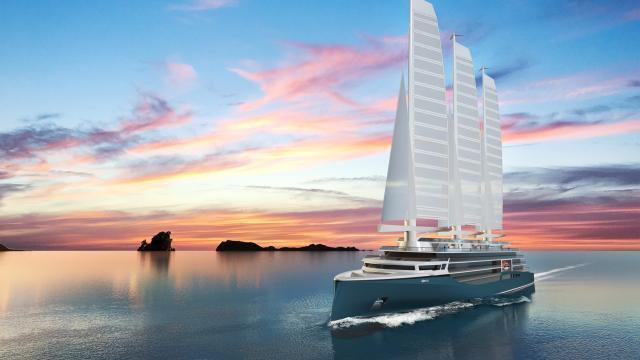 Silenseas the sailing ship of the future

The "Silenseas" project was born in response to the drastic environmental standards at sea. It was necessary to develop a hybrid ship, sailing by hybrid vélique-electric propulsion, thus offering a more eco-responsible cruising experience.

This innovation in the Naval sector was developed in St Nazaire in the business activity area of Loire Atlantique by the Chantiers de l'Atlantique.

"Silenseas" is the result of research work carried out over several years by Les Chantiers de l'Atlantique:

The Silenseas’ concept is available in several sizes of ships which are all fitted with high-tech rigid sails called Solid sail.

A prototype sail has already been successfully tested on Jean Le Cam's 60-foot monohull. During summer of 2018, the half scale version was installed on the cruise ship Le Ponant as well.

Recently, a small-scale model (1/5) of a sail has been in the test phase, installed on the Pornichet dyke (44). This sail of 15 metres height, this self-supporting balestron rig offers the ability to orientate itself in relation to the wind in order to test a maximum configuration. The mechanism will be settled by the teams of Les Chantiers de l’Atlantique and of Multiplast.

This innovation is also part of the "Ships of the Future" programme supported by ADEME.

MECA is proud of having doing its bit in this innovation, especially in: