Now called Seine Musicale, the Hauts-de-Seine Musical Complex near Paris is built on the site of the former Renault facilities on Seguin Island.

Scheduled to open in April 2017, this complex is a key project in the Hauts-de-Seine Culture Valley project. It will host a 6,000 seat concert hall, a 1,150 seat auditorium, rehearsal studios, a business area and commercial premises all on a 2.65 hectare site, with 84,000 m² dedicated to culture.

The consortium comprising Bouygues Bâtiment Ile de France, Sodexo, Ofi Infravia and TF1 are tasked with designing, financing, building, servicing, maintaining and running artistic operations (except for programs scheduled by the Department Council) for the Seine Musicale complex imagined by architects Shigeru Ban  and Jean de Gastines who presented their mock-up in July 2013.

The consortium was looking for a strong symbol for Boulogne-Billancourt, a city located to the West of Paris and integrated into the urban development plan by Jean Nouvel for Seguin Island . Hence the building brings forth the vision of a large ship with its mainsail, made of solar panels, floating over the auditorium.

The sail is mounted on rails and will follow the sun’s path from East to West throughout the day. Hence the light pattern will never be the same within the building’s glass casing.

Construction work started in July 2014 and should be completed during the second quarter of 2017. Visitors will soon be able to relax on the terraces and along the decks or pace the 1,000 m² grand lobby that will be host to regularly renewed cultural exhibitions in addition to the 400 or so annual events: musicals, children’s shows, concerts, festivals running for a period of days, as well as one-off events.

With 170 million Euros invested in the construction of the Musical Complex, this is a project that is unique in both France and Europe and that will have an international impact once completed!

The Meca cluster’s work on the project

Called in by a company called RFR SAS, then T/E/S/S, prime contractors for the framework and mechanism part of the construction, the Meca cluster has worked on the design of the sail mechanisms. Covered with more than 800 m² of photovoltaic solar panels, rotating around the glass auditorium, the sail will follow the sun’s path. The contractor team entrusted the design of the mechanisms used to move the sail to our team.

This is how we came to work on the APD, PRO and VISA phases, to support the project players in developing the sail and its mechanisms. The aim being to allow the photovoltaic sail to move around an axis following the sun’s azimuth, thereby keeping the sail optimally aimed at the sun. The sail will generate electric power as well as masking the sun shining on the auditorium and acting as a sunshade. 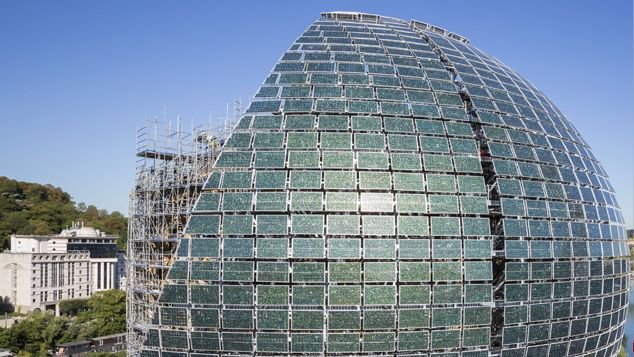 The system comprises a motor drive for the top part of the sail using a slewing ring for aiming it. At the base, there are two central motorised carriages linked together by a traction bar, to ensure the synchronisation of the two half sails. The non-motorised side carriages are used to carry some of the load and add stability to the system.

The entire project was designed by our team of engineers. The calculation, design, use, maintenance and repair aspects were all analysed.

In addition to conventional mechanical analyses for this kind of project, our office also defined the algorithm for meeting with the sun. This is because rather than implementing a system for tracking the sun that would potentially not be very accurate on cloudy days, Meca preferred to calculate the sun’s position over time to send the sail the angular position to reach based on the time and day of the year. Then a PLC was programmed with this algorithm and based on universal time (UT) only, the sail knows the optimum position to reach. 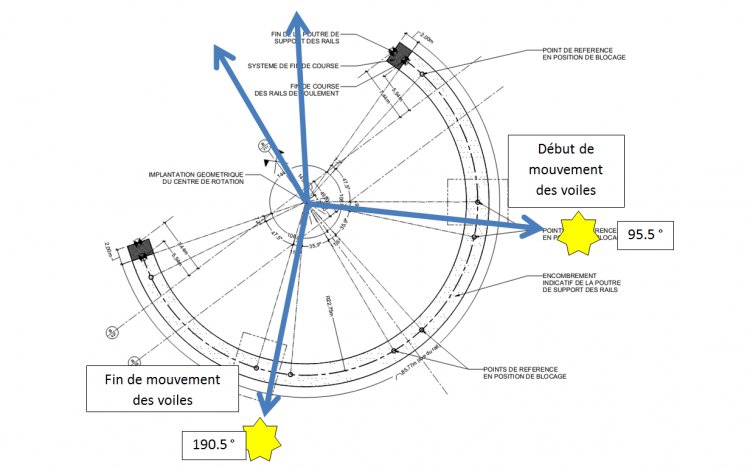 When the centre of the sun exceeds an angle of 95.5° in relation to the geographic North, the sail leaves the East garage and comes into action. Every 15 minutes and until it reaches the South garage when the sun exceeds 190.5°, the sail automatically resets thanks to its algorithm for rendezvousing with the sun. When the sun is below the astronomic sunset, an order is given to return to the East garage to await a new sun cycle.

The general design work was done by RFR (then reused by T/E/S/S for the EXE phase) and went with an articulated system for carrying the sail. Mechanism design was performed by the Meca cluster. 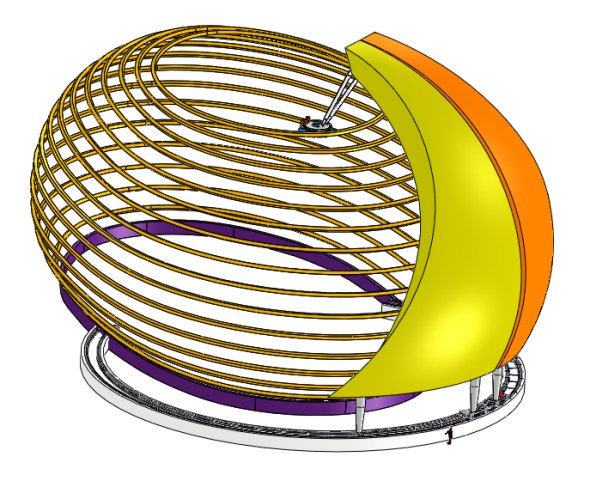 All structure elements, from the slewing ring to the sail, including the support and guidance rails, were minutely analysed by our team to go over all the constraints and make the execution team’s work easier. Execution work was performed by the mechanical teams at Baudin Châteauneuf.

The project is currently under construction and our team is supporting the T/E/S/S group in monitoring progress to guarantee the compliance of the mechanism with the special technical specifications that we wrote.

The sail and its mechanisms are in place, the auditorium’s glass walls are being finished, tests on the sail are scheduled during December. 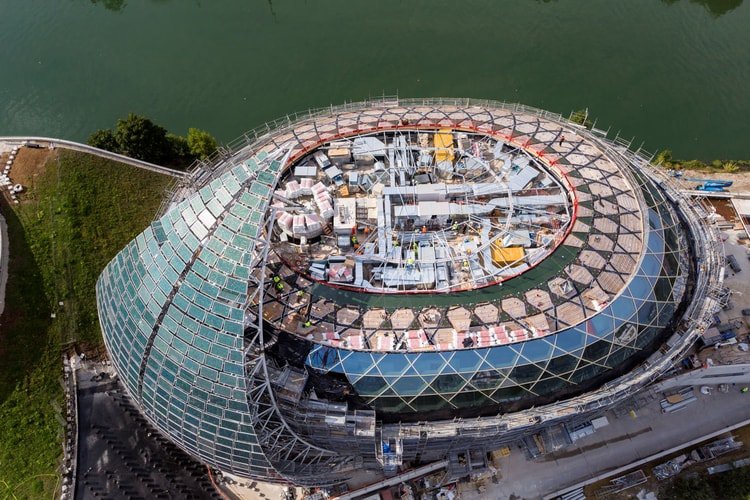